What Does Mamita Mala Want? Find Out Tonight at Laguardia Community College 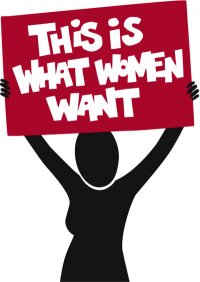 Tonight, I am one of many wonderful featured speakers at the Queens, NYC stop of the nationwide This Is What Women Want Speaking Tour.

Got something to say about the economy, the war, health care, or any other issue?

Then don’t miss This Is What Women Want: a pre-debate speakout in NYC!

This Is What Women Want is your chance to cut through the spin and tell the media, the candidates and the world exactly what you want this election season.

We’re on a This Is What Women Want Tour of speakouts across the country. We started in Boston on Thursday, 8/21, and now we’re taking it to each debate city the night before the debate.

On Tuesday, October 14, local and national media will sit up and listen to women in NYC – from national leaders to the not-yet-known. It could be your voice at that mic!

From the economy, to sexism, racism, and other bias in the media’s coverage of the campaign, to immigration, war, poverty, health care, reproductive justice, sexual freedom, worker’s rights, violence, education, environmental concerns and more, this is an unprecedented chance to set the agenda for the country. Whether you’ve got a criticism of the status quo or a visionary idea that no one has yet considered, we want to hear from you.

Our goal is simple: to ensure that the real and varied concerns of women are a force to be reckoned with this election season.

My words will kick ass tonite. I promise 🙂

This site uses Akismet to reduce spam. Learn how your comment data is processed.